A new album has been recorded! In just under a month too.  It's amazing what a few days of extra time can do.  However, it will likely not be released under my name as a solo artist, and rather under a different name due to significant stylistic changes.  Please stay tuned.

A big thank you to everyone who came to the show on Saturday!
Here is a studio recording of one of the new songs performed, The Warship

Happy New Years everyone!   Unfortunately it has not been a productive year this past year as I would have hoped.  However, there are quite a few new songs sitting on my desktop at the moment, some possible upcoming shows, and possible Youtube ventures in the near future as well.  Stay tuned for good things.  In the meantime, you can check out this belated feature on NoahWay blog about some of my work

The new album has just gotten some finishing touches, and will be released to iTunes, spotify, and other internet places within the next few weeks.  You can stream for free on bandcamp now.    Upcoming shows to be announced.

This is a bit late to get posted on the site, but better late than never I suppose.  Here is a quick blurb about me written on the Gsheon Commons website for the month of March.   Link http://www.goshencommons.org/2013/05/in-goshen-march-comes-in-and-goes-out-like-music-month/

Thanks to everyone who came to the Library show on the 16th.  Here is a new song that was recently recorded and was performed at that show.  Enjoy!   In other news, work on the new album is coming along slowly but surely.  Almost all tracks are recorded, and research is being done in how to best promote and distribute the album.  As always, if you have any ideas or connections, please send me an email (contact information provided in the biography section of this website). 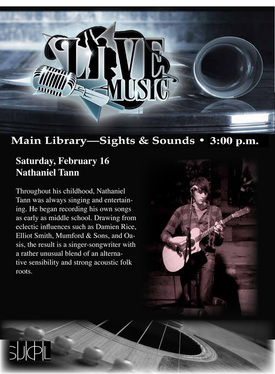 Unfortunately, due to an oversight in my management, music is currently not avaliable on iTunes and Spotify.  This will be taken care of as soon as possible, and I will post about it when it is fixed.  Music is still avaliable for free download through noisetrade and bandcamp, as linked on my website.  I will once again be playing at the Electric Brew on March, 16, 2013 in Goshen IN.

Update:  Music is currently available on Spotify, but iTunes will not be posting music again until after the holidays.  - 12/29/12

I am happy to announce that I will be playing for the first time in the city of Chicago on December the 16th, @ Uncommon Ground on Clark Street.  More details can be found on the shows page, or through this link here.    More information will be made avaliable in the upcoming days regarding this show.   In the meantime, another song has been recorded, and a few more are being written at this time.  My hope is to have an album's worth of material to record by the end of the year.

Some new songs have been written and recorded.  They are now available on my soundcloud page, and are entitled "Fall Lullaby" and "83."  "Fall Lullaby" was recorded between June and August of 2012, and "83" was recorded in August 2012.   Both songs are previews to what is going to be a larger project involving some of the recordings from the Production EP and some new songs that are being written and recorded now.   I am hoping to be able to put this project together sometime before the end of 2012.

To all, a good night.

A new section of the website featuring song lyrics is now being worked on.  Updates will occur on that page sporadically.  In the meantime, lyrics for the Production EP have been posted on the page.
NT

As promised, the Production EP is now available for free download.  It features 4 new songs (some of which have been on the internet and my soundcloud page for a few months previously), and 3 older songs that have been re-recorded.  This EP is a bit of an experiment for me, as I have been playing around with new equipment and (hopefully) attempting to improve my sound.   These songs are a precursor to what will hopefully later become a full-length album of new and old material re-recorded, to be released sometimes at the end of the summer, depending on how much free time I have to work on it.

To learn more about the new extended play, Production, please go to the link at the top of the menu (under "more,") or simply click here.
NT

Just a few updates for how things are going on terms of the new EP that I'm working on.  All the songs that are currently recorded are mixed down and ready to go, so its just a matter of finishing up recording the new song, which should hopefully happen in the next week or so.

I've also recently put up another new song on my soundcloud page, this time a re-recorded (and in my opinion, a much better) version of the song "The Rain."  To listen to the track, please visit http://soundcloud.com/nathanieltann  .  I have also changed the download link for "Together in the Rain," to my new "Noisetrade" profile. You can still download the album for completely free.

Check out a new version of the song "Ten," that I've recently re-recorded in April.
http://soundcloud.com/nathanieltann/nathaniel-tann-ten-2012

Video post-production is completed, so now its a matter of just uploading it to the internet.  This is of course, for the "Osmium is my Air" video, which is the first "single" from my album, "Together in the Rain."  While you wait, here is a video I made of me singing a cover of Noel Gallagher's High Flying Bird's song, "If I Had a Gun."
-NT

Website development has begun.   The music video for "Osmium Is My Air" is currently in post-production, and should be released by the end of the week.  Plans for filming another music video are potentially in the works, although only time will tell as to whether or not it will actually occur.

In other news, I have a gig scheduled at The Electric Brew on the 23rd of June, in Goshen IN.  For more information, please visit http://theelectricbrew.com/2012/06/23/nathaniel-tann-062312/  for more information.  Thanks!